The diversity of customer-specific requirements that konplan, as a service provider, handles daily requires a flexible, easily expandable, and convenient toolchain. Thus, ensuring a consistently high quality. A well-designed setup enables us to identify problems at an early stage, respond to changes in the requirements, and provide complete customer satisfaction.

The diversity of hardware supplied by various manufacturers presents a challenge for the toolchain. Also, a tested and executable version of the corresponding software must always be available. Furthermore, it should always be possible to build and modify the software for many years after a project is completed.

Structure, overview, and the tools used

Although Docker has long been a standard in various areas of software development, its potential and the possibilities of using this virtualized development environment for embedded software is only slowly being discovered. This is especially true for the development of software for smaller microcontrollers. 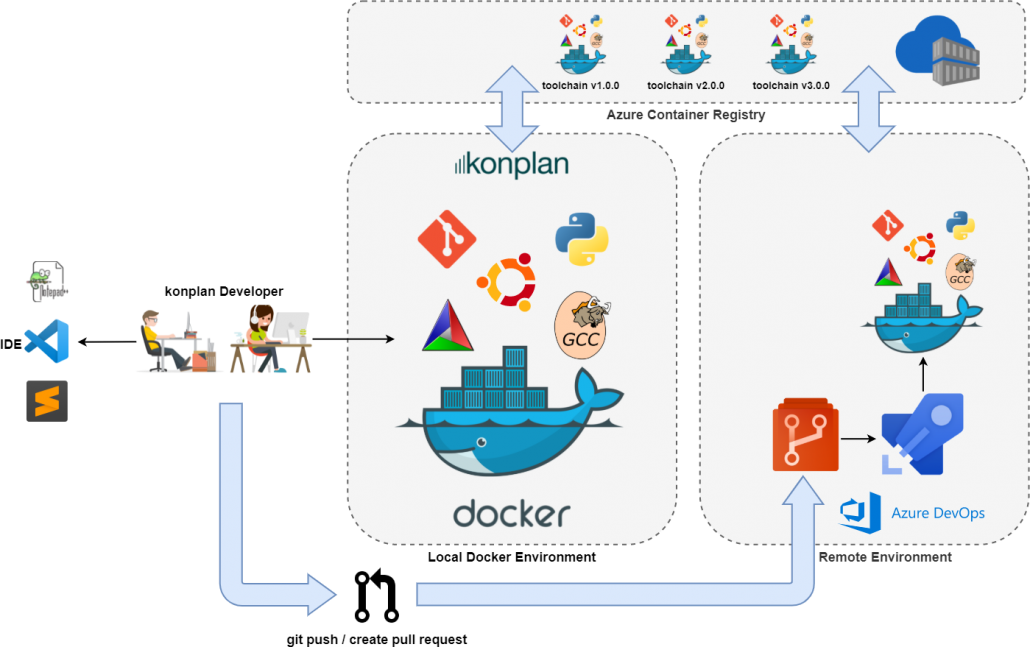 konplan has long been using Docker for virtualized development environments which rely on the well-known, platform-independent Makefile Generator CMake as well as the open source compiler GCC. The build process is supported by konplan’s own Python library, which allows setting up the project and starting the build process. Software versioning and management is done by Git. Automation and preparation for the various developers – as well as for the customer – is ensured with the support of Azure DevOps. Both remote repositories and pipelines are used. The modular structure means individual components can be expanded or exchanged at any time.

The advantages of a virtualized, cloud-based CI/CD toolchain

The advantages of this setup are obvious:

Thanks to the setup used, we can respond to customer requests and modified requirements at any time without major additional effort. The numerous advantages enable extremely pleasant and flexible work methods which result in the development of high-quality software. This brings satisfaction for both the customer – and the developers.

If you would like to benefit from the flexible and reliable konplan solution or if you need support in creating a similar build environment, please do not hesitate to contact us.

We are here for you – send us your request!

Developing together! We put your ideas into practice and accompany your projects until they are ready for the market. Get in touch with our experts now.

Visit us at these locations

You can find a selection of references here. This site uses cookies. By continuing to use the site, you consent to the use of cookies.

We can request cookies that are set on your device. We use cookies to let us know when you visit our websites, how you interact with us, to improve your user experience and to customize your relationship with our website.

Click the different category headings to find out more. You can also change some of your settings. Note that blocking some types of cookies may affect your experience on our websites and the services we can offer.

These cookies are absolutely necessary in order to provide you with the services and functions available on our website.

We fully respect it if you choose to reject cookies. To avoid repeatedly being asked for cookies, please allow us to save a cookie for your settings. You can unsubscribe at any time or allow other cookies in order to be able to use our services to the full. If you reject cookies, all cookies set on our domain will be removed.

We will provide you with a list of the cookies stored on our domain by your computer. For security reasons, we cannot show you cookies that are stored by other domains. You can see this in the security settings of your browser.

These cookies collect information that - partially summarized - help us to understand how our website is used and how effective our marketing measures are. We can also use the knowledge from these cookies to adapt our applications in order to improve your user experience on our website.

If you do not want us to track your visit to our site, you can block this here in your browser:

We also use different external services like Google Webfonts, Google Maps, and external Video providers. Since these providers may save your personal data, you can deactivate them here. Please note that deactivating these cookies can significantly impair the functionality and appearance of our website. The changes will take effect after reloading the page.